I teach a range of undergrad and postgrad modules in music and creative technologies, including the following: 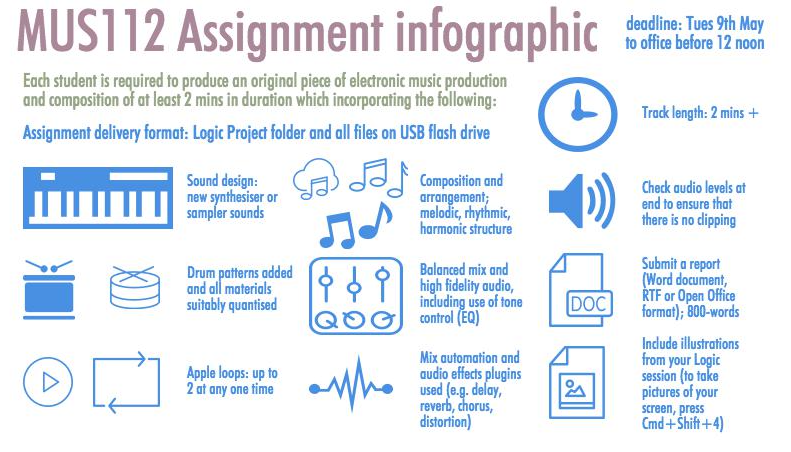 Following on from our arpeggiator work this week, here’s an interesting tutorial on making beats with an arpeggiator!

Making beats with an arpeggiator

Other sources of audio to feed into your EXS24 sampler:

[Note: sampling to create loops (rather than individual percussive ‘hits’ or pitched sounds) is a more specialist topic which will not be covered in class. If you are interested in exploring this topic, see this video and this article.]

I also teach and superivse on the music technology/electroacoustic composition specialism on the MMus degree.

Tesseract is a Max6 application created utilising Jitter / OpenGL physics and graphics objects synchronised to a drum sequencer. The patch has been designed to function both as a primitive 3D audiovisual composition tool, as a well a standalone app with minimal interactivity. After viewing some of the Jitter OpenGL examples presented in class, I was reminded of visuals from various underground electronic music/glitch-core artists (such as the promo videos from Aphex Twin, Autechre and Warp Records).

Matthew Graham: Focus: A Gestural Approach to the Creation and Performance of Electroacoustic Music

NB: Although this work is for the Music rather than CT degree, it is again illustrative of the sort of standard of work you should be looking at for Final Project. (For comparative purposes, though, a Music degree Final Project is worth 20 credits, the CT project is 60 credits, so there is a question of scale, scope.)

This work follows on from Matthew’s studies on the Electroacoustic Composition and Interactive Systems modules.

It is a dance and electroacoustic music piece controlled using a Kinect camera/sensor, inputting OSC control data to Max via the Synapse application.

Performance (and installation) project based on comparing and combining the ideas and methods of John Cage and Christian Marclay. The final piece was installed and performed at Echo Echo Dance Studios, Derry, June 2014.

‘John Cage and Christian Marclay are known for their experimentation on apparatuses to achieve sounds that go against their original purpose. I will set out to discover the concepts behind works from Cage and Marclay and will then begin to develop my own techniques for creating new sounds from ‘undesired’ sounds. How does one liberate a sound? Will understanding the physical properties of noise make them less or more desirable? That’s a different project altogether. I discovered that accepting sounds for what they are, could ignite creativity regardless of modern technologies, education background or dexterity. The excitement of discovering new sounds innovates and creates new possibilities.’

Philip Wallace: Intonarumori 101: can the seminal work of Luigi Russolo be reconstructed in the contemporary space to give added insight into the relationship between ‘analogue’ (physical) and digital modes?

This project traces connections between the noise intoners of the Futurists and the contemporary Maker movement and the development of physical computing and tangible user interfaces. It pairs a faithful recreation of the original intonarumori with a 21st–century recontextualisation using Cycling 74’s Max and and an Arduino I/O.

The final piece was installed and performed at Void Gallery, Derry, in June 2014. The following is a demo video of the Intonarumori 101 in operation.

(alias) Conrad Heart: ‘The Heat Closing In’ from We Are Now Living in a Cyberpunk Novel (set of music videos and accompanying study exploring cyberpunk motifs in the contemporary world)

If you are interested in what I’m currently teaching, feel free to get in touch at bd [dot] bridges [at] ulster [dot] ac [dot] uk. If you’re a graduate and want to update me on your current projects, please email me at the same address.