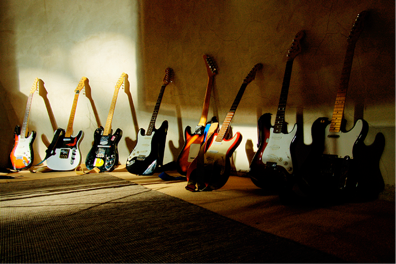 Angels at the Shotgun Wedding was written as a multi–movement work for 23 electric guitars and was premiered by the Maynooth Electric Guitar Array (an ensemble of Maynooth Music Technology students), under conductor Marc Balbirinie at Daghdha Space, Limerick, 2nd April 2008.

This large scale piece, my tribute to New York ‘Downtown’ composer Glenn Branca, uses a combination of electronic drones, microtonal tunings, and amplification to create novel harmonies and textural effects. The aim is to create a piece which balances the inherent force of the ensemble with the subtlety of the materials, creating something both delicate and visceral with blunt instruments.

The piece’s materials are divided between the electric guitars and a set of simple tape-based drones which are different for each movement of the piece. The electric guitar parts are somewhat unconventional, in that they are derived primarily from the re–tuning of the guitar strings for various just intonation microtonal intervals which are generally variations on a ‘standard’ interval type (e.g. a major third), with the six strings divided into two identical, octave–offset, groups of three. Although the piece’s intervallic materials are primarily obtained from open strings (to preserve the intonational integrity of its intervals), some supplementary intervals are obtained through fretting major second and perfect fifths, as the 12TET version of these intervals provides a relatively good approximation of just intonation. 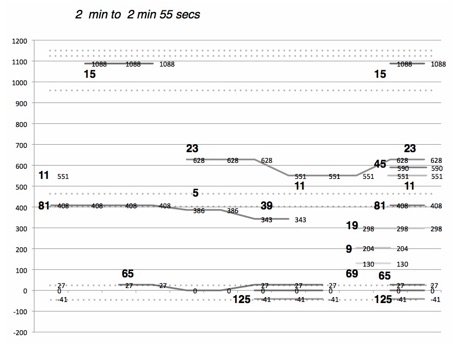 Composer’s analytical score for Movement 2, including tape drones (dotted) and guitar parts (with harmonic numbers and cent indicators), with exact specification of drones below