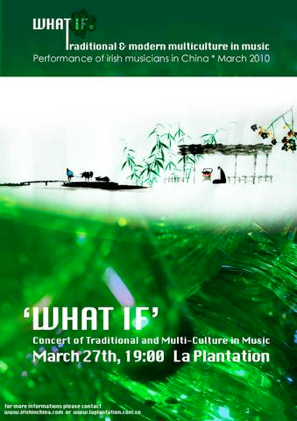 Making Ghosts from Empty Landscapes grapples with the issues of connecting instrumental practices from Irish and Chinese traditional music within the framework of contemporary music. The project might be best summarised as creating a virtual ‘meta–instrument’ as a unifying structure which is loosely based on the instrument structure (and common performative) role of the Irish uilleann pipes. The pipes are generally used in roles which combine the relatively constant accompanying backdrop of the instrumental drones with foregrounded melodic materials which highlight a gestural imperative and gravitational axis (through the effort required to sustain accurately–tuned notes in higher registers). This piece shares a basic structural approach with Roger Doyle’s Under the Green Time (1995), which creates a virtual meta–instrument from the combination of uillean pipe samples (providing melodic/foreground gestural elements) and electromechanical sources  (providing background/drone elements).

However, the present piece focusses more extensively on the melodic/harmonic and textural/perceptual implications of such a broad organisation of materials. Its instrumental sources are spectrally processed into more extended electronic drones (using Michael Klingbeil’s SPEAR software), some featuring microtonal tuning effects. These tuning effects give rise to perceptual decomposition (see Bregman’s (1990) account of perceptual grouping and segregation principles, Auditory Scene Analysis). This finds a parallel in the mind’s inclination, when confronted with an empty landscape or static scene, to search for anything which indicates activity, sometimes accidentally producing perceptual phantoms (perceptual false positives) in the process; the piece’s original conceptual inspiration. The result is that the drones provide a fertile background soundscape from which the musicians ‘sculpt’ animate gestures, creating or evoking the ‘ghosts’ in the landscape.